January 27, 2013
In recent weeks, I've had a few discussions (both online and off), about the comparison between human life and all other living beings.

Basically, I get a lot of flack for 'humanizing' animals.

Yes, I mourn for them. I physically feel pangs of empathy for them. I think it is just as heartbreaking when they die, when they're abused, when they're separated from their young. I can't rationalize their existence in any other way.

But I'm not humanizing them.

I realize that my view isn't necessarily the most popular one.. But I'm hoping that if I lay it all out in one post, it will be easier to understand where I'm coming from, even if one chooses to still not agree.

At any rate, the discussions that came up in the last couple weeks were in relation to animal testing, the school shooting in Newtown, and then the President eating meat while stating how we need to address and reduce violence in our country.

I know these seem like varied topics, but it all comes down to one issue that I'd like to address here:

Are human lives more important than the lives of any other living being?

My answer is a resounding.. no.

When I say this, the first counter-argument is, "So you're saying you'd be equally upset about a cow dying, as about your husband dying?"

Answer? No, of course not.

It is normal for us to feel closer and more attached to members of the same species; as we can relate to them, communicate with them, and more easily bond with them. But those are emotional attachments, especially when talking about close relationships within our families and friendships.

Emotional attachments are not intrinsic value.

That is the same reason we can separate ourselves, even from other humans, in times of conflict. We tell ourselves, "They look different." "They act different." or "They speak a different language." Therefore, we conclude that they are 'less than.'

It's the basis of racism, of people who think we should bomb an entire section of world, and so on. We take away their 'value' .. But did it really change? Or did we just perceive it that way?

And if we can so easily do that to other humans, imagine how quickly our egos allow us to do it to animals...

The second counter-argument is usually reserved for the religious. They state that humans have souls, while no other animals do. Therefore, humans are clearly more important.

If you've read my blog for awhile, you know I'm an atheist. But let's presume for a moment that humans do have souls. I won't even attempt to refute that. But I have to assume that even most 'believers' understand fossil record, and that they understand there were neanderthals before us.

Note: If you are someone who thinks the fossil record is made up, that dinosaurs never existed, and so on.. you might as well skip this entirely, because we'll not find common ground on this portion of the debate.

So, if current humans have souls, wouldn't our immediate ancestors? I would have to assume so. But then, if we take it back one more step, then we would also assume that all homosapiens had/have souls. In which case, they all descend from primates. So, do all primates have souls? Because that then leads directly into the animal kingdom.

See where I'm going with this?

If you believe at all in evolution (and many religious people do), or if you just believe in the most recent of fossil record, it's impossible to define a moment when the soul appeared. Where one generation of primates didn't have any, but their offspring did. Or when neanderthals didn't, but humans suddenly did. So logically speaking, if humans have souls.. so does every other living creature on Earth.

The final counter-argument is pretty simple in nature. It's usually, "But we're smarter." or "We've clearly accomplished the most."

Sure, we can solve more complex puzzles. We can build great wonders. Explore space. We have accomplished great things.

But we're also the only species that goes to war. That pollutes the very things we need to sustain life. That 'creates' food that actually is killing us. That cages, confines, and kills other species for enjoyment. That over-populates, then longs for immortality at all costs.

We are the sole owners of nuclear weapons, mass-murders, genocide, and torture.

So, how smart are we, really?

It says something profound about humankind, when you realize that we're the only species.. that if we all died off tomorrow, the world would not only survive.. it would THRIVE. 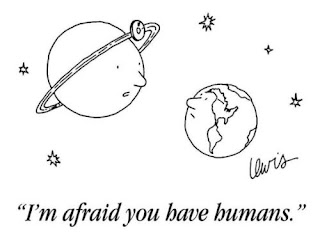 And yet, we convince ourselves that we're of primary importance. All other things are here to merely serve us.

But the truth is, at the end of it all.. when the sun engulfs the Earth, or a black hole moves just a little too close, or another catastrophic impact occurs... we humans aren't going to matter at all. Everything 'out there' is the great equalizer. We will die all the same. Nobody will be left to marvel at our wonders, or read our great stories. Nobody will have an emotional kinship with us, and therefore, place false value upon us. As far as the great vastness of space is concerned (which will eventually be all there is), a human death is no more important than a cow's, a dolphin's, or a snake's.

Any belief to the contrary, is one created solely by convenience and ego.

Which, of course, are the two greatest and constant downfalls of mankind. 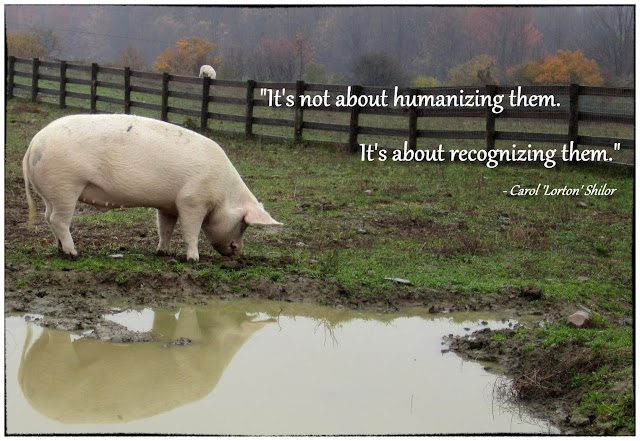 (If you recognize the value of all living creatures, please find 'the Hopeful Herbivore' on Facebook, and join the discussion. You can also read about my venture into veganism, and what led me here, at theEcoRealist.com)